The People's Purse - A Campaign for Global Debt and Tax Justice

The People’s Purse is the wealth of our communities – it contains the abundant potential of the future.

The People’s Purse is the sum of all the natural and economic resources that rightfully belong to the people all over the world. It holds the key to thriving communities and the prosperity and flourishing of future generations.

But it is being looted, by banks, corporations, governments, and greedy individuals. It is being plundered to repay illegitimate debts, to reward risky loans, and make up for tax evasion.

Governments worldwide are failing to protect the resources which belong to the people.

The People’s Purse Campaign for Global Debt and Tax Justice is an activism campaign launched by DDCI in 2014, set to run over two years. We continue to urge our government and leaders to protect the People’s Purse. We are campaigning on a number of global debt and tax justice issues, and calling for the cancellation of unjust debts and an end to global tax dodging. 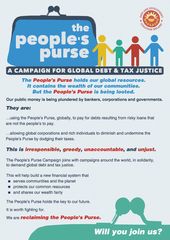