Who are the real owners of companies?

The government should provide public transparency on the real owners of companies and trusts in Ireland without delay. 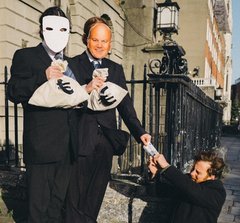 Who are the real owners of companies registered in Ireland and are they paying their fair share of taxes?

The Irish public should be able to find out who are the real, or ‘beneficial’, owners of companies and trusts registered here in Ireland, because ultimately Irish people should be able to know with whom we are doing business at all times. Such information should be available in a public, centralised register.

In recent years, the focus of DDCI’s campaigning was for a public register of beneficial owners of companies and trusts to be established in Ireland as part of a Europe-wide push for greater tax transparency. Although the UK recently became the first major economy to implement a public register of companies, while others, including France, Denmark and Australia, have shown their support for such a measure, the Irish government has not yet come out in favour of such a register – in fact, it remains unclear what the government’s position is.

In March 2014, the European Parliament (EP) voted strongly in favour of the establishment of public registers of beneficial ownership throughout Europe. However, a subsequent compromise text agreed in December 2014 between the Council and the EP has weakened this. While it does mandate for centralized registers of beneficial ownership information in all EU countries accessible to relevant authorities, the agreement firmly stopped short of public access. In the case of companies, for the public to gain access to this information ‘legitimate interest’ must be proven, while for trusts there is no opportunity to apply for access to information. While the idea of ‘legitimate interest’ may include civil society organizations working on tax justice issues and investigative journalists, this will be left up to individual governments to interpret.

For tax justice campaigners, it’s important to note that this EU Directive determines what member states must do at a minimum: there is room for governments to go beyond it, like in the case of the UK, France and Denmark where public registers have already been created, or are in the process of being created.

Although the Directive, entitled ‘Proposal for a Directive of the European Parliament and of the Council on the Prevention of the Use of the Financial System for the Purpose of Money Laundering and Terrorist Financing’, was adopted by the EU in May 2015, there remains much to be done to ensure that the maximum level of transparency can be upheld across the EU.

DDCI continues to urge the Irish government to stand up for tax transparency at a national and EU-level by establishing a fully public register without delay here in Ireland, and to push for the same across the EU. To do this, the Irish government needs to move beyond minimum implementation of the current EU Directive, and grant full public access to this information. If not, the government should be clear about what its reasons are for not doing so.