The Case of Ireland 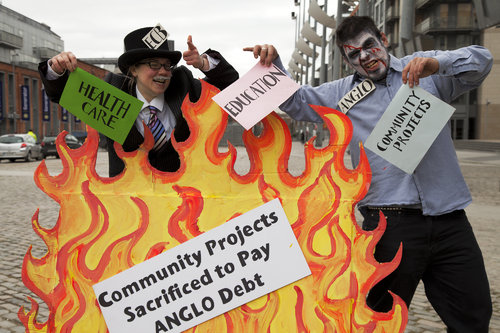 In 2006, before the crisis hit, Irish public debt stood at almost $44 billion, 24.6% of GDP, and the country was in a state of fiscal surplus. At one time considered to be proof of the success of the neoliberal model, the “Celtic Tiger” passed from one extreme to the other: from Boom to Bailout. Anglo Irish Bank, which had participated in the inflation of the Irish property bubble, was bailed out by the Irish Government in 2010, tripling the public debt, and shooting the fiscal deficit up by 30.9%, in a clear example of the collectivisation of private debts.

This situation led the Irish Government to request a bailout of €90 billion from the IMF and the European Union, which went towards the recapitalisation of the banks, while a brutal austerity package was imposed on the country. By the first quarter of 2013, the public debt had increased to 125% of GDP. In January of that same year, on the verge of ceasing payments, the Irish Government agreed to a refinancing of their debt with the European Central Bank (ECB), swapping debt payments in the short term (at 8% interest) for long term State bonds at much lower interest. Despite media pressure to view the refinancing of the debt as a successful process, the Anglo: Not Our Debt campaign condemned the fact that the swap represented the laundering of an illegitimate debt “accumulated to pay the speculators who gambled money as part of an irresponsible bank that is now under criminal investigation”.

The Case of Ireland and Illegitimate Debt

DDCI and its supporters took an active role in the campaign to freeze the sale of 'Anglo Bonds', and will build upon those experiences in current and future campaigns. The campaign was launched in the wake of the so called ‘Anglo tapes’, which revealed how Anglo executives misled the government before the issuing of the 2008 bank guarantee. DDCI is continuing its fight for debt justice, and firmly believes that the people of Ireland must not be held responsible for this criminal debt. 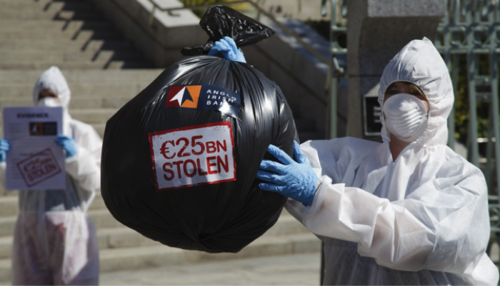 Background and Context - How did this Happen?

It has been acknowledged by the Independent Commission of Investigation into the Banking Sector in Ireland, the governor of the Irish Central Bank, among others, that Ireland’s sovereign debts are causing systemic economic instability in Ireland, and that a range of actors, including the banks, the Financial Regulator, the Irish Central Bank, and the Irish government, including the Department of Finance, were involved in the irresponsible accumulation of unsustainable bank debt. The Commission of Investigation also highlights a dangerous international erosion of credit standards, and a herd mentality between financial and public institutions and groupthink within them, reinforced by a widespread international faith in the efficiency of financial markets. Specifically, the Commission pointed to the lower credit standards adopted in Ireland and internationally and the ‘speculative mania’ in Ireland in the property market where ‘even obvious warning signs went unheeded in the belief that the world had changed and that a stable economy was somehow automatically guaranteed’. The Commission also termed external auditing companies who were responsible for monitoring the accounts of the banks that subsequently required emergency lending assistance, as ‘silent observers’ and public authorities as ‘enablers’ in creating the crisis.

Ireland’s large debt is due to the socialisation of unpayable private debt by Irish banks, meaning that people in Ireland were made responsible for repaying the banks' commercial debts for years to come. This socialisation happened as the Irish government decided to guarantee the deposits and senior bondholder debt of six pillar Irish banks. The social impact of this debt burden and the impact of the loan policy conditions accompanying international ‘bailout’ loans has been disastrous.

“The social price being paid is catastrophic, not least because the austerity policies are sending the economy into a tailspin: national income is already down over 15% from its peak level.  Unemployment stands at almost 15%, close to half a million people… Emigration is estimated to be running at 40,000 per annum.  The economy is mired in recession, with investment down from over €48 billion in each of 2006 and 2007 to a little over €18 billion in 2010.   Bank loan approval rates fell from 95% in 2007 to 55% in 2010… Meanwhile, Irish banks, despite their newly cautious lending practices, are highly dependent on short-term loans of over €150 billion from the ECB and the Irish Central Bank as bank deposits have fallen steadily. If Ireland were to try and return to the private financial markets, it could probably only borrow at a very high rate of interest”.

The decisions that led to the socialisation of private debt, and the social impacts thereof have raised serious questions regarding the justice or legitimacy of Ireland’s debts. From a debt justice perspective, the key question that arises is how responsibilities for dealing with this unjust debt could or should be shared fairly.

Political Organising: Learning from Countries of the Global South

Due to the fragmented nature of the popular campaigning response to the crisis, an unusual coalition of civil society organisations have formed against the debt. Debt Justice Action, formed in January 2011, is an alliance between global justice organisations, community groups, faith-based groups, academics, and some trade unions. It is notable and interesting that much of the analysis of this grouping has been drawn from lessons from people’s experience of living with unjust debts in Africa, Asia and Latin America. Due to the lack of experience of Irish campaigners in responding to sovereign debt crises, we looked to learning from movements in locations where such struggles have been ongoing for decades. Three clear concepts were borrowed from debt justice campaigns in the Global South and applied to popular organising in Ireland: debt audits, illegitimate debts, and co-responsibility in creating debt crises.