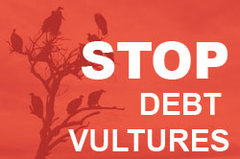 Stop Debt Vultures: Implications of the Vulture Attack on Argentina

DDCI has released analysis in response to the extraordinary legal case of vulture funds attacking Argentina for more that US$ 1 billion and have called for an end to vulture fund predatory behaviour.

The implications of the vulture fund case against the Government of Argentina, being heard in New York, has wideranging implications for the hopes for debt justice everywhere.

Some of the implications of the case:

The further disempowerment of indebted countries: The global debt justice movement seeks to challenge the current practice of placing the entire responsibility for debt crises solely on the debtor country involved. The ruling on the Argentina Vs vulture funds case is a massive setback in this regard because it sets the precedent of incentivising bondholders not to accept debt re-structuring, but instead to ‘holdout’, and sue the government in question through the courts instead. This threatens the power of governments of indebted countries worldwide to achieve debt reductions on unsustainable and/or illegitimate debts.

Empowerment of vulture funds: The court ruling provides a status of increased credibility to vulture funds - a dangerous development given their particularly opportunistic and profiteering function in the global debt system. The failure of influential governments to intervene paves the way for financial traders to use their war-chests to define policy in an area that affects the lives of millions of people around the world.

We ask that the Irish Government: