Patrick Honohan: Do the Right Thing 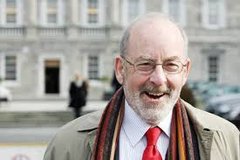 A call to Patrick Honohan, the Governor of the Irish Central Bank to do the right thing

Last week it emerged that the European Central Bank (ECB) is not happy with the restructuring of Ireland’s most odious socialised banking debt – the debts of Anglo Irish Bank and Irish Nationwide Building Society. The debts of Anglo et al – about € 30 billion – are worth nearly half the cost of the private banking debt made public in Ireland – € 64 billion, a staggering 40% of our national income.

In February 2013, amid huge public outrage at the promise to pay over € 30 billion to settle the Anglo debts, the Irish government changed the form of the debt but without in any way reducing the size of it. It was previously in ‘promissory note’ form – like an IOU – and the government changed it to sovereign bonds, a tradable form of debt now held at the Irish Central Bank. The Irish Central Bank is set to sell the bonds to international markets at a rate of about € 0.5 billion per year.

But now it seems the ECB wants this process speeded up as they are concerned that this restructuring broke ECB rules by allowing so called ‘monetary financing’ within the Eurozone. The ECB is afraid that the new arrangement is viewed as the ECB creating money by allowing the Anglo debt to be paid over a longer time period.

The Anglo: Not Our Debt campaign, of which DDCI is an active member, also has problems with the Anglo debt restructuring – but for very different reasons.  Our objections are three-fold:

For all these reasons, we should not sell these bonds to private bondholders. The Irish Central Bank should freeze the sale of the bonds, pending a full cancellation of this illegitimate debt.

The power to make this decision lies with the Governor of the Irish Central Bank, Patrick Honohan. He should not bow to this renewed pressure from the ECB, the same institution that forced us in 2010, through extreme bullying in the context of the ‘bail-out’, to pay for the entire banking debt.

It is time for Governor Patrick Honohan to do the right thing.

Patrick Honohan, will you do the right thing?