Debt Campaigners Highlight Resistance to Rule of Debt Around the World 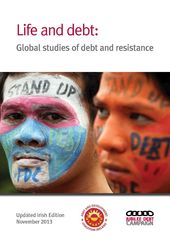 Debt Campaigners Highlight Resistance to Rule of Debt Around the World

In the lead up to its 20th anniversary and the launch of new research today, Debt and Development Coalition Ireland highlight that people across all continents of the world are resisting the rule of unjust debts. The new report, Life and Debt: Global Studies of Debt and Resistance, published jointly by Debt and Development Coalition Ireland and the Jubilee Debt Campaign UK, shows that people in Ireland are far from alone in bearing the burden of unjust debts.

"This important research shows that we are living in a global state of debt crisis. On the occasion of Debt and Development Coalition's 20th anniversary, we call for global action to ensure people in Ireland and in the poorest countries in the world do not have to pay illegitimate debts."

The report, focusing on 10 of the most indebted countries in the world - Ireland, Egypt, El Salvador, Greece, Jamaica, Latvia, Pakistan, the Philippines, Portugal and Tunisia - charts out the debt levels, impacts of austerity and, crucially, the resistance from people on the ground.

"As a result of Ireland's illegitimately socialized banking debt, Ireland's debt is now the 4th highest in the Euro area. Sadly, this report shows our situation bears a striking resemblance to debt crises in many other countries of the world. But it also gives us hope, that in our resistance to such unjust debts, we are not alone."

Notes to the editor
The full report can be found here

The report reveals that:

Jamaica's government spends more on foreign debt payments than Greece, a huge 33% of its revenue. As health spending has been slashed, the number of mothers dying in childbirth has almost doubled in the last 20 years. Campaigners are calling for a moratorium on payments and an audit of the debts, saying 'No to debt slavery, no to the IMF'.
Ireland's debt is now the 4th highest in the Euro area.

Ireland spends nearly as much in interest payments on its sovereign debt as on as its national education budget. The government's austerity approach has targeted the poorest and most vulnerable. In 2009, the average income of a person in the richest 20 per cent was 4.3 times that of a person in the poorest 20 per cent - within a year, that ratio had leaped to 5.5. Groups like Debt Justice Action, Ballyhea Says No! and the Spectacle of Defiance and Hope are resisting unjust debt and austerity.

Greece itself is spending 29% of revenue on foreign debt payments. After four years of IMF and EU imposed austerity, the economy has shrunk by 25%, and 1.25 million people now live in 'severe material deprivation'. Groups like Women Against Debt are providing support for low-income women affected by austerity measures while fighting further cuts.

Pakistan has received 'temporary' IMF bailout loans for 30 of the past 42 years, yet the country is still spending 20% of revenue on foreign debt payments this year. The campaign for a public audit of the debt, much of which dates back to past military regimes, has been growing since the devastating floods of 2010.