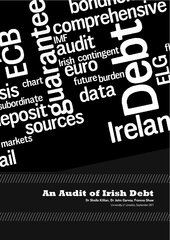 Issued by: Afri, Debt and Development Coalition Ireland and UNITE

The Audit of Irish Debt Report can be downloaded here »

Today, a team of researchers from University of Limerick led by Dr Sheila Killian, will release the results of an audit of Ireland's debt. The audit, commissioned by NGOs Action from Ireland (Afri), Debt and Development Coalition Ireland (DDCI) and the trade union UNITE, will provide a credible and explanatory picture of Ireland's debt. The audit was carried out by Dr Sheila Killian, Dr John Garvey and Francis Shaw.

Dr Sheila Killian, head of the Department of Accounting and Finance at the University of Limerick and lead researcher on the audit project said, "The audit report seeks to quantify and explain Ireland's sovereign debt, both real and contingent, for which the Irish people have become responsible."

The report collates and cross-references data from the Central Bank, the ECB, the CSO and NTMA as well as third party information including the financial accounts of the covered institutions, Reuters data, Dáil questions and wikileaks cables to map out the many facets of Ireland's debt - including government bonds, NAMA debt, the bank guarantee, and the limited information on ownership that was available for the first half of 2011. It also clearly outlines the cashflow and guarantees currently between the Irish government and people, the guaranteed financial institutions, the ECB and the bondholders.

Dr Andy Storey of Afri commented, 'This excellent report provides an urgently needed public service by giving a credible picture of the scale and nature of Ireland's debt which will greatly support increased understanding among the people of Ireland on the debt that is deeply affecting their lives."

"We were aiming as much for public education as anything else", added Dr Killian. "That's part of our remit at University of Limerick. We're trying to produce a document that makes sense of a complicated situation, and dispels some of the myths around this. We're also making all our sources open, so that others can build easily on what we've done."

Nessa Ní Chasaide of Debt and Development Coalition Ireland added, "Independent debt audits have been carried out in many heavily indebted countries around the world, such as in Ecuador, and are a crucial citizens' tool in supporting greater transparency regarding decision-making on sovereign debt issues."

Jimmy Kelly of UNITE trade union commented, "This audit report will support action toward a just and democratic solution to Ireland's debt. A fair solution requires that all the relevant information be made freely available in order to help ordinary people decide for themselves what should be done."

The authors of the report highlight that the dominant role of the holders of Ireland's debt in determining policy is new, leading them to conclude that this "strengthens the case against their anonymity."

The report will be launched at 11.30 on Thursday 15th September at Buswell's Hotel Dublin, in a public information session chaired by Sinead Pentony, Head of Policy at TASC.