Campaigners 'reveal all' for tax justice 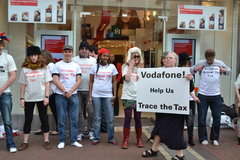 Campaigners will strip to their t-shirts on Grafton Street today to expose the message "Vodafone Reveal the Tax" whilst dancing to music from the film "The Full Monty". The 'flash-mob' outside the Vodafone store in Grafton Street, Dublin will raise awareness about the critical issue of global tax injustice.

The action is part of an ongoing campaign, led by Christian Aid and Debt & Development Coalition Ireland, calling for the introduction of a new international accounting standard that would require multinational companies to 'reveal all' by reporting on their taxes paid and profits made in each country where they operate though 'country-by-country' financial reporting.

Sorley McCaughey from Christian Aid said, "We estimate that tax dodging by some unscrupulous multinational companies costs impoverished countries as much as $160 billion each year, which is far more than they receive in aid. Country-by-country financial reporting would ensure multi-nationals reveal all the details about their profits and tax payments, and help tax authorities in these countries investigate whether companies are paying the correct amount of tax or not."

The campaigning organisations are not accusing Vodafone of tax dodging. They argue that Vodafone should become a leader in its sector by making tax a corporate social responsibility issue.

Nessa Ní Chasaide from Debt and Development Coalition Ireland said "Vodafone should take a lead on the issue of tax justice by publicly declaring their support for country-by-country financial reporting. Companies are increasingly investing time and money into corporate social responsibility, but they need to recognise that paying the right amount of tax in the right place is essential to doing business in an ethical way."

Christian Aid and Debt and Development Coalition Ireland indicate that international organisations such as the Organisation for Economic Co-operation and Development (OECD) have recognised that tax dodging is impoverishing the most vulnerable countries in the world. The International Accounting Standards Board (IASB) is the body with the power to introduce country-by-country reporting. It is funded by the 'Big Four' accountancy firms - PricewaterhouseCoopers, KPMG, Deloitte and Ernst & Young - which have significant influence in the institution.
ENDS