What is Tax Justice?

Tax is a global justice issue. Potential tax revenues lost to the EU amount to approximately one trillion euro every year, and billions are lost from developing countries each year for the same reason. Estimates have shown that developing countries lose more resources to transnational corporations dodging taxes than they receive as development aid, including countries supported through Irish Aid.

Tax justice is a central part of DDCI's work on global financial justice. 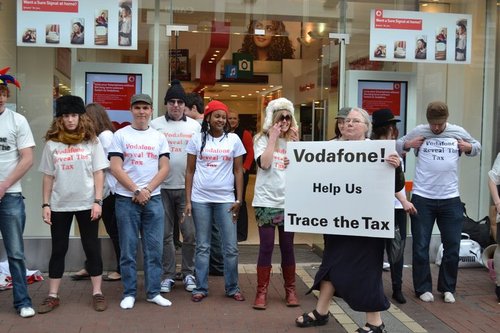 DDCI calls for a just tax system for all countries in the world.

Recent events, from Lux Leaks to the Panama Papers, suggest that the coming months will provide a critical opportunity for governments and citizens to critically engage and discuss issues of financial justice, including tax justice.

One of the central issues to DDCI’s advocacy and campaigning work is how countries in the Global South and Global North can protect their public purses through greater tax justice. All tax that is not paid to governments where it is owed is vital money lost to public services, such as health, education or public infrastructure. The erosion of tax bases through tax dodging impacts on the governments’ ability to fund these public services out of domestic resources, and leaves them dependent on external finance, such as development aid or loans from the IMF. The activity of multinational corporations is key to this loss of domestic revenue through abusive tax avoidance. Tax avoidance occurs when companies try to dodge taxes through complex internal structures and by finding loopholes in tax laws. Furthermore, domestic tax systems are often skewed in favour of these multinational companies, which get incentives that indigenous companies and citizens do not benefit from.

The OECD is currently reforming global tax rules but 80% of the world’s countries, including countries of the Global South, are excluded from this decision-making process. DDCI works towards fundmental change in the current global tax regime to bring about greater tax justice for all countries, including those in the Global South, and one which sees multinational corporations paying their fair share. To achieve this, we believe that alternatives to the current unjust international tax system must be considered in any debate on tax justice.

While DDCI calls for a radical change to the current unjust global tax system, we also work on pushing for greater transparency in the current system. Greater tax transparency is a vital foundation for tax justice. It would lead to the unveiling of multinational’s profits as they move around the globe in search of lower tax rates, in what the LuxLeaks files called ‘tangles of interlocking operations’. Recent evidence from a former senior PwC employee stated that, within the firm, it was company policy that tax avoidance schemes with only a 25% chance of withstanding a legal challenge could be sold to corporations. These schemes are designed for multinational companies to artificially reduce their tax bills, often to the cost of countries of the Global South, from which the profit is shifted. Companies such as PwC rely on current global tax secrecy to keep these potentially illegal deals away from public scrutiny. This tax secrecy must be stopped.

DDCI is part of the ‘STOP Tax Dodging’ initiative, which brings together the voices of civil society in 15 countries across Europe. We are united in a desire to see an end to tax dodging by multinational companies and more action by European leaders to tackle this problem.