Who was Thomas Sankara? 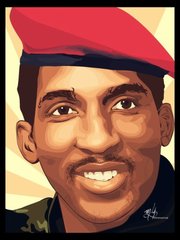 Thomas Sankara was an African revolutionary and politician who served as president of the West African country of Burkina Faso in the 1980s. After assuming power in 1983, aged just 33, Sankara launched the most ambitious plan of social and political reform that the continent had ever seen. In addition to programmes of mass immunisation against common diseases, education (in a country in which 90% of the people were illiterate), and anti-corruption reforms, Sankara was decades ahead of his time in other fields. An early environmentalist, Sankara planted over ten million trees in order to stop the spread of the Sahara desert. Sankara's views on women's rights were also very progressive, arguing that "We cannot transform society while maintaining domination and discrimination against women who constitute over half of the population".

Perhaps Sankara's most well-known project however, was his efforts to make Burkina Faso self-sufficient, and remove any colonial influences. Food security was of prime importance to the Sankara administration, and although the country he had inherited was plagued by famine and poverty, by the end of his presidency Burkina Faso had achieved complete self-sufficiency through agrarian reforms and the restructuring of rural society. Importantly, this was achieved without any foreign aid, which he said "produced nothing more than disorganisation and enslavement". Indeed, it is very telling that under his government, the name of the country was changed from the "Republic of Upper Volta" to "Burkina Faso", which translates as "The Land of Upright Men".

Although Thomas Sankara was assassinated in a Coup d'État in 1987, his legacy continues to be felt, not just in his homeland but around the world. In fact, his ideas continue to thrive and remain ever more relevant to our modern world. This is particularly evident in his condemnation of illegitimate debts. While Sankara was talking about 1980s Africa when he said that “those who led us into debt were gambling, as if they were in a casino.. there is talk of a crisis. No. They gambled. They lost... We cannot repay the debt because we have nothing to pay it with. We cannot repay the debt because it is not our responsibility”, his words are just as applicable in Ireland today as they ever were.

Below, you can watch Thomas Sankara's speech to the African Unity Organisation, Addis Ababa, 1987:

Thomas Sankara: An African Leader with a Message for Europe, by Nick Deardon.