The Irish Debt Crisis - What Happened?

The Irish Debt Crisis - What Happened?

Collaboratively developed by DDCI and The Spectacle of Defiance and Hope

The aims of the resource are to: 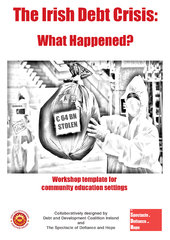 This is everything you will need to organize, carry out, and evaluate a workshop that explores the Irish banking crisis, with groups of at least 8 people. We hope it can be used with all sorts of groups; adults, teenagers, community workers, activists, volunteers - anyone who wants to understand the banking crisis and particularly the role of Anglo Irish Bank within this.

Why would I want to run this workshop?

This pack enables you, along with other people, to explore the banking debt from a justice perspective. This means taking the particular experience of communities into consideration. The idea is to write the stories of real people into the story of what happened with the banks.

Certain campaign groups (Ballyhea Says No to Bondholder Bailout, DDCI, Anglo: Not Our Debt and others) are campaigning for debt justice in Ireland, and believe that people should not be held financially responsible for the bad investments made by bankers and investors. The Spectacle of Defiance and Hope agree with this and believe it is still possible to prevent many more years of debt repayments leaving the country – money that could be invested in communities who are suffering at the hands of austerity. The nationalisation of the Anglo debt is illegitimate, and should be written down completely.

How long will it take to run the workshop?

The workshop itself can be done in less than a day, or if you want over 2-3 sessions. You can decide how long you would like to take. This resource provides a five-part structure, which you can adapt according to the group you are working with. However, it requires at least three hours. The intention is that the workshop will lead to a positive action within the communities – that once we understand what is happening, we will talk and think about what it is we can do to stop the injustice, now that we are better informed.

What will I need to do the workshop?

The aim of this workshop is to raise awareness on events that took place in Ireland from 2008 until now, relating to the banking crisis. Much of the emphasis is on the Anglo Irish Bank story and it is framed within an understanding of social justice – we think what happened was unjust and we want to reverse it.

It is hoped that people who complete this workshop will:

Though this pack provides facilitators with information needed to run the workshop, the exercise is designed to be highly participatory. Facilitators are not expected to have all the answers or to be the only ones with knowledge to share. The hope is that by participating in role-play and sharing experiences, each of us in the room will begin to know the language of bank debt, enabling us to think about working towards change.