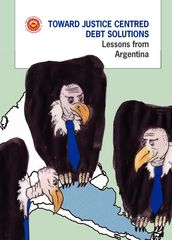 Click here to download our report "Towards Justice Centred Debt Solutions" by Alan B. Cibils of the Universidad Nacional de General Sarmiento, Buenos AiresArgentina provides one of the most notable examples of the devastating effects that vulture funds can have. Having accrued huge volumes of debt during the military dictatorships of the 1970s and 1980s, in the 1990s Argentina underwent IMF-mandated structural adjustment, along with rigid austerity measures, which further entrenched its economic decline. Eventually, in 2001, Argentina opted to default on its unsustainable debts, which led to two rounds of debt restructuring in 2005 and 2010. By the end of this process of renegotiation, Argentina had achieved a reduction in the nominal value of the bonds, lower interest rates and longer maturity terms. 92.4% of debt was restructured and the process was considered highly successful. However, this left 7.6% of debt unrestructured and the holders of some of that debt, the so-called "hold-outs", include a number of vulture funds.

While vulture funds originally entered Argentina during the 2001 crisis, and had continued to pressure the Argentine government for repayment, their efforts have escalated considerably in recent years. The case of one such hold-out, NML Capital, was particularly significant. In 2012, NML Capital brought the Argentine government to court in New York, where they argued that Argentina, by repaying the debt-holders that had accepted restructuring and not those that had refused, had violated the pari passu clause, which states that no bondholder may be given preference over any other. In a move that surprised the international and legal community, Judge Thomas Griesa sided with NML Capital, and ordered Argentina to pay the vulture fund in full. 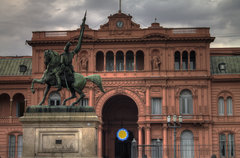 This case has a number of extremely important implications. Firstly, NML Capital stands to make a 1,600% profit on the debt, and this figure represents lost capital that the government of Argentina could have invested in education, healthcare, infrastructure, and any number of social projects that would improve the country's economic development. Secondly, this ruling sends a strong signal to the other hold-outs that similar lawsuits may result in similar repayments. Finally, the creditors that did accept the restructuring may go back on their deals, and demand full repayment. If this were to occur, it would likely send Argentina into yet another debt crisis and economic tailspin.

While it remains to be seen exactly how the government of Argentina will respond to this in the coming years, the case of Argentina is a troubling account of the potential vulture funds have for destroying a country's economy and hijacking its sovereignty over its own economic affairs.