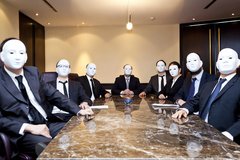 Despite the many political speeches about creating financial transparency, the public have still not won the right to know the names of people who control the companies operating in our societies. And despite it being common knowledge that some of these anonymous legal structures, including both companies and trusts, are being used to launder money from tax evasion, drug trafficking and corruption, EU finance ministers are still hesitating to take action. Meanwhile, the European Parliament has come out in strong support of taking the necessary step to solve the problem – to put an end to secrecy and create public registries showing who actually owns companies, trusts, and similar legal structures.

The European Parliament’s call for action will not materialise until the EU member states agree. However, after more than a year of discussion the ministers have still not reached a common position.

When they meet in Luxembourg tomorrow (June 20), our finance ministers will have yet another chance to look each other in the eyes and say “Let’s do it!”

DDCI says that Minister Noonan should not wait for the EU members states to agree - he should set a standard and ack for tax justice NOW!

You can take action by emailing the minister today - only 24 hours left on this action!

Make sure you tweet and share our new campaign photo and ask your leaders to stand up for financial transparency and stop protecting tax dodgers. #STOPTAXDODGING

Background on the process around beneficial ownership

The issue of whether or not to establish public registries of the real – beneficial – owners of companies, trust, foundations, and similar legal structures is taking place as part of the review of the EU’s Anti Money Laundering Directive.

The parliament has already adopted their joint position - you can see the outcome of the vote here. As part of their position, the Parliament included public registries of beneficial owners of companies, trusts, foundations, you name it. The wording was as follows:

11) It is important to ensure, and to enhance, the traceability of payments. The existence of accurate and up-to-date information on the beneficial owner of any legal entity, such as legal persons, trusts, foundations, holdings and all other similar existing or future legal arrangements is a key factor in tracing criminals who might otherwise hide their identity behind a corporate structure. Member States should therefore ensure that companies retain information on their beneficial ownership and make adequate, accurate and up-to-date information available through central public registers, accessible on-line and in an open and secure data format, in accordance with Union data protection rules and the right to privacy as enshrined in the Charter of Fundamental Rights of the European Union. Access to such registers should be granted to competent authorities, in particular FIUs and obliged entities, as well as to the public subject to prior identification of the person wishing to access the information and to the possible payment of a fee. In addition, trustees should declare their status to obliged entities.

The Parliament’s full position can be found here. Despite the elections, we still expect the parliament to stick to this position.

Both the finance ministers and the heads of state have discussed the issue at several meetings in 2013, and in their council conclusions from May 2013, the heads of state actually said they wanted the whole directive agreed by the end of 2013, but that obviously didn't happen.

Currently, the issue is being discussed in a working group under the council. We think they might reach agreement sometime during the summer. Once the position of the council has been adopted, they will start negotiating with the Parliament and the Commission through what’s known as “trialogue” negotiations.

If the council comes out in favour of public registries of beneficial owners of companies, trusts and foundations, we can be quite sure it’s going to become a reality. So that’s what we’re pushing for!